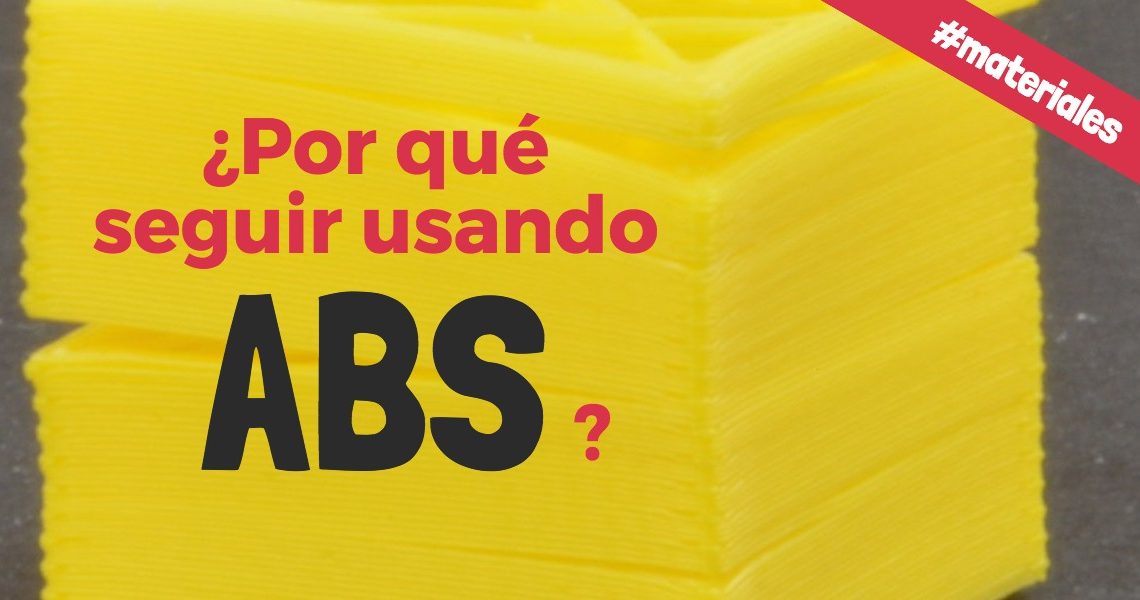 ABS has been and is one of the most popular plastics in 3D printing, but with the arrival of new materials that are easier to print or even more resistant, its flaws are becoming more evident: it is difficult to print, it emits an unpleasant smell… Are there any uses for ABS in 3D printing? We give you all the keys to ABS and the projects for which you should decide for it.

Why is ABS such a popular 3D printing plastic?

ABS is the second most widely used plastic in 3D FFF (Fused Filament Fabrication) printing, just behind PLA, as evidenced by the data in the reports 3D Hubs publishes every quarter:

The reasons why ABS is so popular are mostly historical: it is a thermoplastic that was already being used in the traditional manufacturing industry when additive manufacturing development began. Thats how it ended up being one of the first 3D printing polymers.

Due to its availability and applications, ABS was one of the thermoplastics best positioned for using as a material at the dawn of 3D printing. It is the primary material for Stratasys printers, the pioneer of 3D FFF printing. When the RepRap movement began publishing the printers from which most of today’s desktop models are derived, ABS was the most popular and readily available 3D printing material. It also printed better than PLA on those first hotends of early DIY printers.

Today ABS is still widely used, but new materials have appeared that are replacing it: PLA is the most popular material because it is easier to print and does not emit odors, and new filaments are being introduced that outperform its mechanical properties.

However, there are still some specific uses for which ABS is still the best material, and that is what we will talk about in this article. But first, a few recommendations on ABS.

What are the drawbacks of ABS?

Anyone who has printed on ABS as well as on other materials such as PLA, PETG, flexibles… can realize the downsides of ABS in 3D printing:

With the problems we have discussed, in most cases it is not convenient to use ABS for 3D printing as there are other alternatives that are more effective and easier to print.

When you should use ABS in 3D printing: when using it with acetone

Finally, there is a specific case in which we believe that printing with ABS is the best option: when you are going to use acetone afterwards to polish or glue the part.

There are still no other 3D printing materials for which there is a solvent as easy to obtain and as relatively safe as acetone. That’s why acetone is used over ABS mainly for two operations:

If you don’t know what we mean by acetone smoothing, you can watch this video of BCN3D – the Spanish manufacturer of the Sigma printer– in which you can see both the process to follow and the final finish of the piece.

When you should think about using ABS for your prints

Although, as you can see, we have a fairly critical opinion of ABS, it is true that it can be used in a practical way in other specific cases other than with acetone, especially if you have to make a part and it is the only option you have at hand::

At Bitfab we have been printing for several years and almost never used ABS. It is so difficult to print for large parts that we would have to charge very expensively in order to do the tests and repetitions needed to get a perfect part. With the new closed printers we are designing and building we will be able to offer ABS at affordable prices.

But, in the meantime, nothing has stopped us from offering our customers parts that are resistant to stress, shock or temperature. What we do is offer ASA and PETG parts, which have better properties, to customers who ask us for ABS. Drawing on our experience, we have gathered our knowledge of these two materials in two blog articles:

ABS is a very popular material in 3D printing because it has been used since the beginning of this technology, but today there are other alternatives easier to print or with better properties for the vast majority of cases of use.

Did you enjoyed this article?

Here at Bitfab we love to share what we learn every day printing parts for our customers. If you liked our job, help us reach more people by sharing this post in social media.

If you also want to 3D print some parts with us, you can leave us a message and we will give you a quote in less than 24 hours: