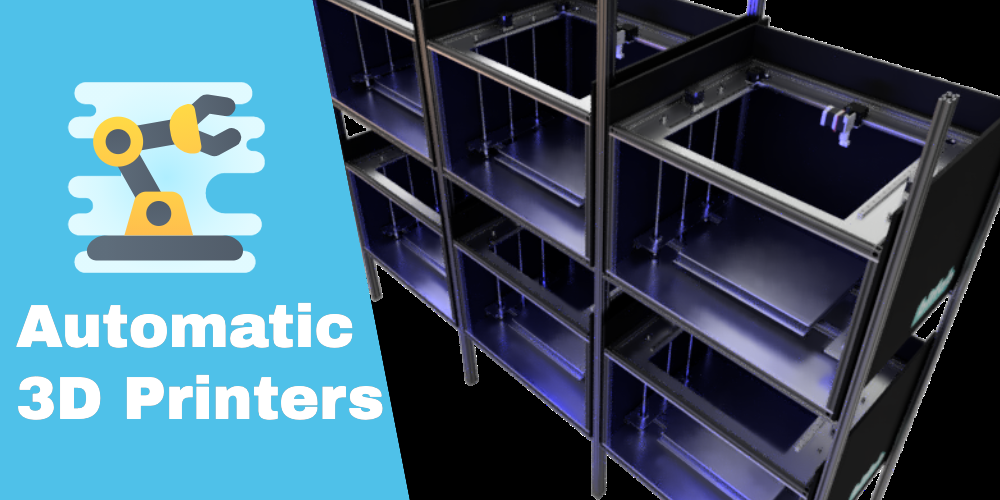 The future I would like for Bitfab to have?

For me it is the automatic printer farms: printers in which the part is automatically extracted from the machine, so you can print 24 hours a day without having to worry about it, and thus operating the whole facility with very few people.

It is a subject that I am very interested in, so today I bring you a brain burst of ideas with everything I have been thinking and seeing throughout this time of research.

Enjoy it; I hope that by sharing, someone will benefit from it.

Part ejection on the 3D printer

This is the simplest solution and one of the ones I like the most, because you don’t need anything but the printer itself. It is a matter of incorporating some system to remove the parts. It could even be the very same printhead that pushes them forward.

It usually requires a GCODE to automate the extraction, which is very easy to implement in any slicer. Sometimes, it also needs a modified head to push the parts, or an extra shaft to do it.

This system only adds an extra shaft to eject the pieces, but it should only be used for parts with little adherence to the bed and very short, so as not to interfere with the arm during extraction:

And this printer has a much more polished system for parts with no height limitation:

Part extraction with a robot arm

Robot arms have been used in this industry for decades and are already being used to remove parts from other machines such as machining centers. They are a type of robot that can be used for almost any task, so it makes sense to use them here too.

One of the most striking projects is the cell of the now-defunct Voodoo Manufacturing project, with a Universal Robots‘ arm.

And here’s another project that uses an open source robot arm:

And the Formlabs resin printing cell, Form Cell with a robot arm mounted on a rail which takes care of the entire process, from tray change to post-processing:

Look at this other cell (one of my favorites), where the printer extracts the printing surface by itself, with a stop at the bottom of the Z-axis path, so that the robot can grab it. It is a detail that solves many of the design problems that come to my mind:

The ones I like the most are systems with a robot: not exactly a robot arm but a simpler robot designed specifically for this task. Two DIY systems that work based on this principle:

How to eject a part in a delta printer

One of the advantages of the delta is that the bed is static. With a static printing surface it is much easier to implement an extraction system.

This project takes advantage of that feature to extract the parts with a fairly simple system. Apologies for the quality of the video, which is not the best, but it is the one in which the system is best appreciated:

Makerbot already developed a conveyorized extraction system in the early days of 3D DIY printing and patented it. It is the Automatic Build Platform, which saves many problems by changing the printing surface, and you only have to worry about removing the part.

A twist on the Makerbot Automatic Build Platform: why not tilt the XY axes and make infinite parts?

With this system you can make 2 types of new parts: either manufacture automatically with parts that are produced one by one on the conveyor belt (like in the video), or a single part that can be infinite in the Z axis (profiles, very long parts…).

The parts require a slightly different slicing that is already available for any hobbyist or company.

Even though I like it, I don’t trust very much the idea of printing on a belt, or having the head tilted. For long parts it is a perfect solution, but for stand-alone printing I prefer more conventional solutions and changing the printing surface with some automatic system.

Do you want us to manufacture your parts?

Our printers are not yet automatic, but the parts come out just as well as if they were. We will just take out the printing tray with our hands.

Ask us for a quote to manufacture your parts with 3D printing or any other digital manufacturing technology you need: