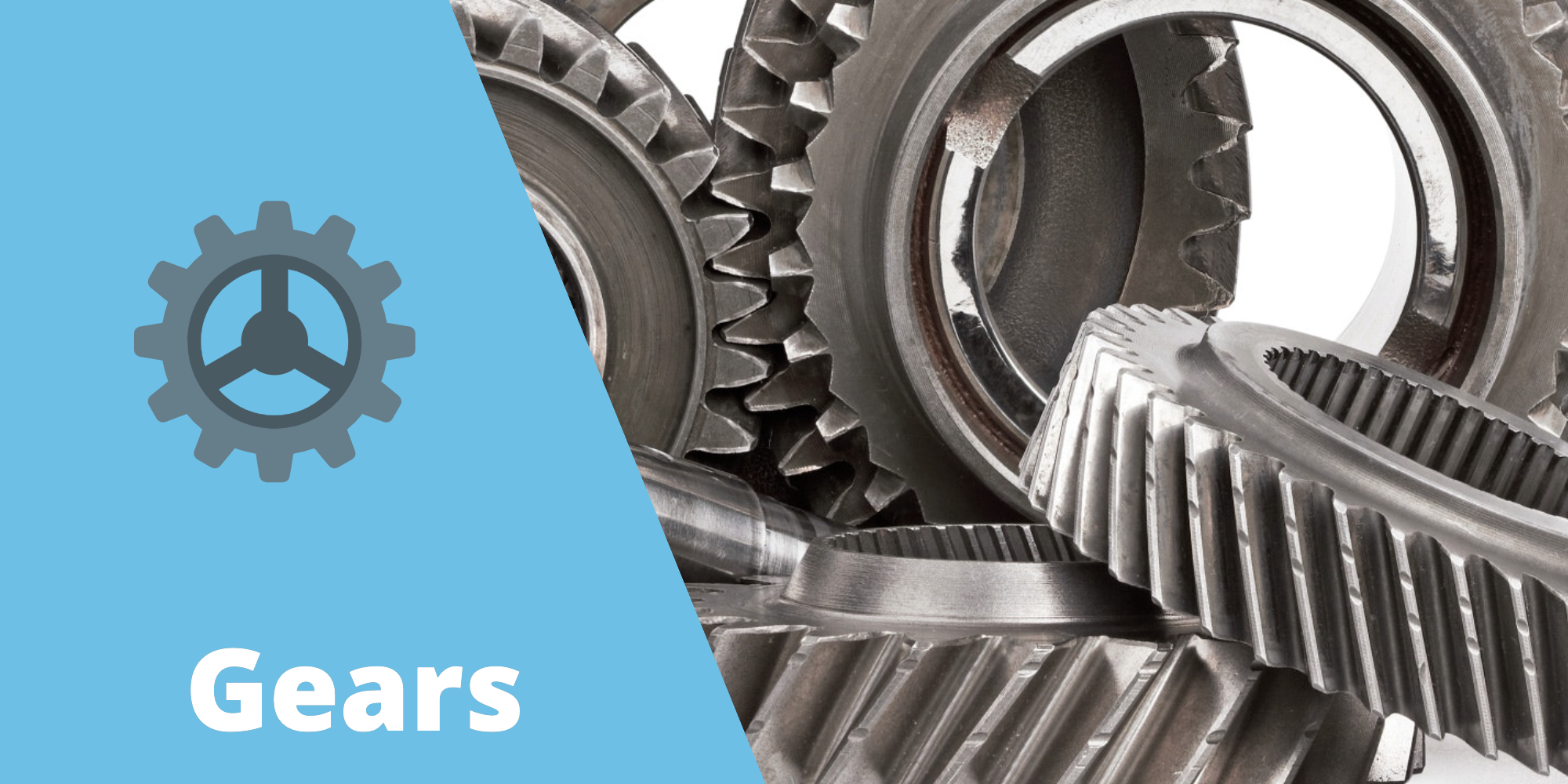 Gears are a fundamental part of any mechanism because of their ability to transfer motion, force and torque between different components. There is a huge number of different types of gears, depending on what task they perform: changing the speed or force of rotation, changing the axis of rotation, transferring power between a motor and other moving elements…

Today at Bitfab we will teach you everything you need to know about gears.

What is a gear?

A gear is defined as a wheel with teeth on its edge, usually cylindrical, which is used to transfer the movement from a power generating element such as a motor to the spot where we want to apply the force, with transformations in the rotation axis or speed.

What are the parts of a gear?

A gear can be very complex, but the most common ones have three distinct parts: the toothed crown, which transfers the movement, the bearing, where a shaft (of a motor or another part of the mechanism) is coupled, and the partition between them, which sometimes appears in the form of arms.

The partition or arms of a gear

It is the part of the gear that connects the crown and the bearing, in order to transfer the movement. There are many variants of this part, since, depending on the technical requirements, it is possible to make a very resistant but heavy solid partition or thin radial arms that are less resistant but lighter. The weight element can be crucial in order not to add unnecessary mass, since by increasing the weight of a moving element we are increasing the inertia in our system.

Due to the need to find gears with an appropriate partition, there are many intermediate options, with thin, thick, solid, perforated partitions…

The bearing of a gear

The bearing is the part where an axis that will transfer the movement is attached. This shaft can be from a motor or from another part of a mechanism.

The crown of a gear

Since the properties of the gear itself are closely related to how many teeth it has and how they are arranged, let’s first look at the parts of a tooth in a gear.

Parts of a tooth

As you can see, the tooth has the following parts:

Crown geometry: the circles that define it

In addition, the geometry of the crown is defined by a series of circles that give the gear its shape:

Going back to the crown and in relation to the teeth, the main parameters of the crown are:

Depending on what we want to do in our mechanism, we will have to select one type of gear or another, since each one is designed for a very specific function.

The most common type of gear, used when force or speed needs to be reduced or increased in circumstances where speed is not very high.

A slightly more refined version of the previous one. Quieter and capable of operating at higher speeds. They are also double-toothed. Also available with double helical teeth, in opposite directions, which support even higher speeds and outputs.

They are used to change the direction of rotation in a mechanism, usually perpendicularly, when high speeds are not required.

Like the previous ones, they are used to change the direction of rotation but in this case the supported speed is higher.

This type of gear uses a central gear around which smaller ones rotate, hence the name, as they remind us of the solar system with the sun in the centre and the planets orbiting it.

These gears are widely used as they generate a very constant output speed and work without vibration or noise. In addition, these mechanisms are usually quite compact.

These gears allow us to convert a rotary movement into a linear movement and vice versa, so they are extremely useful.